All The Places to Get A Drink In: Kona, Hawaii

As temps dip back on the mainland, there is not better time to say aloha to Kona. Stretching almost two-thirds of the entire West side of The Big Island of Hawaii, the Kona District is home to natural parks, coffee farms, historic landmarks, clear waters and the historic seaside town Kailua-Kona. Since the weather on this side of the island is almost always dry and sunny, there are many white sand beaches perfect for sunbathing, snorkeling and swimming. This full face snorkel mask review should further enhance your snorkeling experience.

Kona also boasts a lively scene for dining, nightlife and shopping. While Kona may be famous for coffee, we decided to explore the boozier side of this beach oasis. From breweries to bars, check out the best places to get your drink on in Kona. 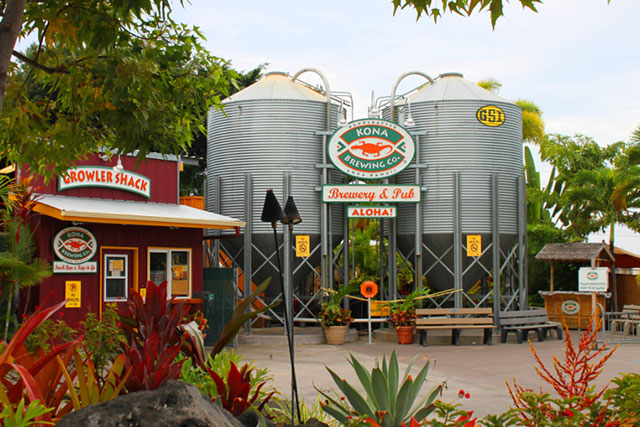 You can’t talk about drinking your way through Kona and not stop by The Kona Brewing Company Pub & Brewery. Inspired by the Aloha spirit, Kona Brewing Company was founded back in 1994 by Cameron Healy and his son Spoon Khalsa. Inside the brewpub, you can spend a few hours lounging at our masterpiece U-shaped Koa bar with great grub and great beer. Brewery tours are available daily, and the Growler Shack is also open daily, serving beer-to-go.

Kona brews more than a dozen varieties of beers a year. Each of these complex, full-tasting beers has a relaxed style and charm about it. The regulars such as the Big Wave, which is a lighter-bodied golden ale with a tropical hop aroma and the Longboard Island Lager, a crisp, pale-gold lager made with choice malts and aromatic hops, brewed in a traditional lager style are available in all 50 states. But at the brewpub you can sample many other many harder to find variations, like the The Kanaha Blonde ale the Gold Cliff IPA and the Fire Rock Pale Ale is a copper-colored ale made from roasted malts and a selection of premium hops.

Best of all, Kona brewpub gives back to Mother Earth. In 2019, their new, 30,000 square-foot brewery, down the street from the original Kona Brewery and Pub, will open to become one of the most sustainable breweries in the world. With their partners at Purpose Energy, they’ll recycle the organic brewing byproducts to produce electricity, heat and clean water for the brewery. 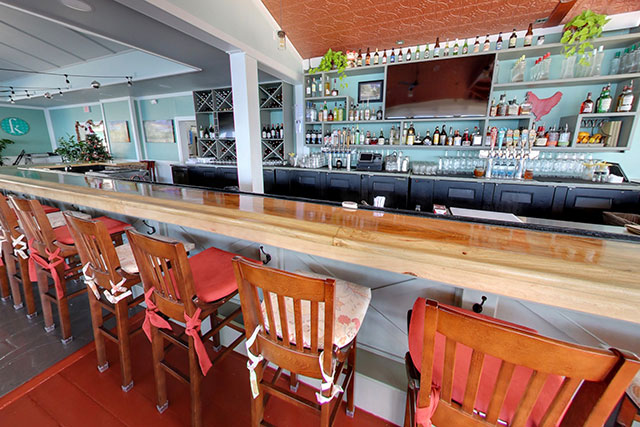 They say slow and steady wins the race. When it comes to cuisine and cocktails in Kona, Foster’s is a “scratch kitchen” recently referred to as “slow-food.” What that means is they produce a vast majority of the menu in-house and from scratch. Some items require a little extra time for preparation, but when it’s not “fast-food” it’s food worthy. Foster’s works to highlight the hard work and dedication of local farmers by utilizing their fresh fruit, vegetables and meats and serve products that are crafted locally and produced at its home in Hawaii. From craft beers to kombucha, local freshly baked breads, Kona coffee and locally made ice creams, guests are likely to support more than one local business by dining at Foster’s Kitchen. Kitchen menu highlights include Cajun Furikake Seared Ahi, Hawaiian Po’ Boy Sandwich, Island Style Hamburger Steak Plate and Grilled Veggie and Basil Flatbread Pizza.

With the beverage program, guests can except a wine list featuring over two dozen bottles including a $5 house chardonnay, house pinot noir and house cabernet. In addition to craft beers, Foster’s has a sublime cocktail list. Foster’s signature Lele is a blooming local hibiscus and citrus cocktail that tingle the senses in a field of lemongrass surrounded by Kai Coconut Pandan. The Shaka Me Rye features mint from the Foster’s garden, Templeton Rye whiskey, and pineapple. Inspired by the Haiku Stairs on Oahu, the Stairway to Heaven is a sweet sweet climb made of Rumhaven Coconut Rum, Stoli Vanilla, hand crafted macadamia syrup, fresh pressed orange juice and coconut milk. The Ginger Meets Mary Ann give the best of Gilligan’s worlds with Kai Lemongrass Ginger Shochu, Hawaiian made kombucha and elderflower. The Catcher In The Rye, made with Absinthe, Antica and Pirate Mikes black bitters sends this rye sazerac back to darker times. 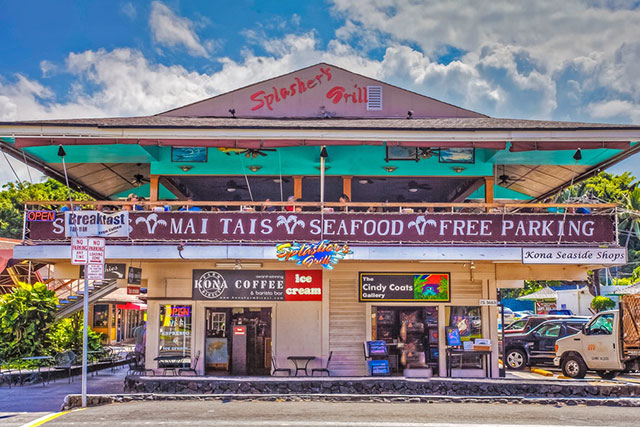 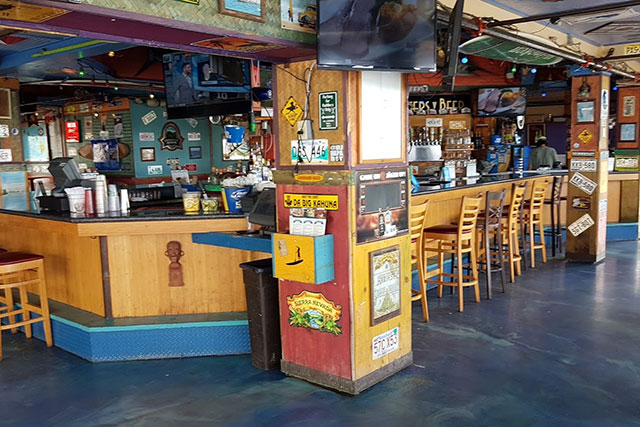 Self-described as a “dive bar and sports oasis,” Laverne’s is an all-around great bar for anyone wanting to watch a game without sacrificing open-air ocean views. Although 4,221 miles from Chicago, this Coconut Groves local spot is a bonafide beach meets baseball Cubs bar that is decorated floor to ceiling with variety of mementos and memorabilia. The menu reflects the two concepts coming together with local dishes such as Blackened Ahi Sashimi and Kilawen (Filipino Style Pork Ceviche) alongside classic bar bites with an island twist like Kilaueau Pork Wings and Hawaiian Burger. At Laverne’s you’ll find a full service bar with a long list of local and imported beers on draft and in cans/bottles. The bartenders also serve up classic tiki cocktails such as the Blue Hawaiian with Rum Haven Coconut Rum, pineapple juice and float of blue curacao and the Dark & Stormy with a heavy hand of Ron Diaz Premium Dark Rum poured over Gosling’s Ginger Beer. The Lilikoi Lemon Drop is also a favorite made with Premium Stoli and Ohranj Vodka, fresh lemon triple sec with a splash of lilikoi puree. Additionally, Laverne’s is open for breakfast on the weekend. Wash down those Banana Macadamia Nut Pancakes or Hawaiian French Toast with breakfast drink specials including the Kinky Aloha Mimosa, New Amsterdam Mango Screwdriver, Keoki Coffee and Humpy’s Bloody Mary.

Huggo’s opened its doors in 1969 as a casual gathering spot where a good steak, fresh fish and a pile-it-on salad bar quickly established the restaurant as a Kona classic. With its stunning waterfront location, Huggo’s has since earned a reputation as Kona’s leading restaurant for just-caught seafood, spectacular sunsets and casual elegance. The award-winning restaurant features daily menu specials, fresh fish and its signature teriyaki steak, a menu favorite for nearly 50 years. 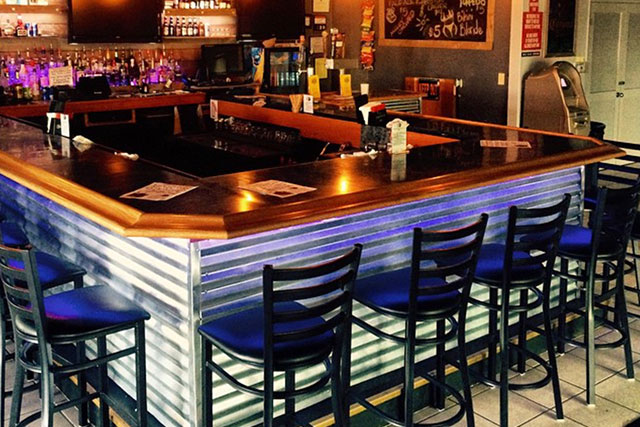 “We accept everyone as long as you want to have fun.” That’s the motto at the gay friendly watering hole MyBar. This come as you are bar boasts two pool tables, dart games and giant dance floor with live DJ’s on Friday and Saturday evenings from 10 p.m. to closing. In addition to karaoke nights, Sunday through Thursday evenings at 6 p.m., the bar regularly host drag performers and LGBTQ+ fundraisers. In addition to beer and bar bites like, MyBar has a cheeky cocktail list ready to wet anyone’s lips. If you need an energy boost, the MyBar Bruiser is made with a blackberry whiskey blend mixed with blueberry Red Bull.

The Cranny Apple, for vodka fans is a delicious combo of cranberry vodka, mixed with apple and a twist of lime soda. The Moana Margarita is the perfect Island Margarita complete with a salt rim and touch of coconut while the Mango Lani is a rum lovers delight with Bacardi, a shake of OJ and mango and float of Chamboard. There is also a special menu of Stoli Swallow Your Price Cocktails for $8 including the Peach On The Beach made with Stoli Peach with a splash of orange, cranberry and lemon and the Creamy Cucumber with a creamy blend of Stoli Cucumber, cream of coconut and a touch of lime. 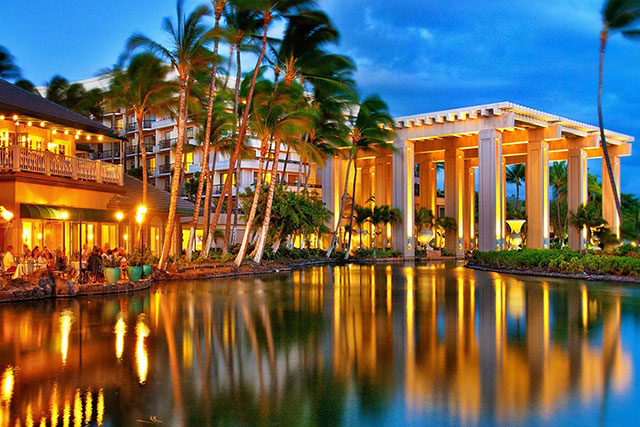 In a stunning oceanfront setting, the Kamuela Provision Company dining room offers one of Hawaii Island’s most spectacular sunset views. Guests can dine on exquisite, locally sourced cuisine, ranging from succulent prime steaks to Hawaiian seafood specialties. In addition to the impressive wine list, savor specialty martinis and pupus in the Blue Lounge at KPC.

Nui Italian is a brand-new Italian restaurant and bar, with seated dining overlooking the pizza kitchen and a grab and go area for guests in a hurry. The bar features cocktails that are light and refreshing using local craft spirits and Hawaiian tropical fruits. Chianti and pinot grigio are available in carafes by the half and full liter, while a full list of wines by the glass and bottle highlight guest favorites and Italian selections.

Located near the Main Lobby, Kona Tap Room is a convenient and fun gathering place with an exciting array of 16 craft and domestic beers on tap. There is also a menu of beertails made with Kona Brews including the Sun Chaser with Wailua Wheat Ale, Absolut Citron vodka, orange juice, mango puree, the Big Wave Rider made with Big Wave Golden Ale, Sauza silver tequila, Disaronno, Aperol, passion fruit puree, sweet & sour and the Sail Away with Lemongrass Luau blonde ale and Myers’s dark rum. And with bites like Poke Nachos and Lobster Mac n Cheese, it’s the perfect spot to cure any “ale”-ments. Guests can also grab drinks at the Lagoon Grill overlooking the resident dolphins or at one of the pool bars scattered throughout the massive resort. Hint: The best Mai Tai cocktails in the resort are found at Kohala Pool Bar. 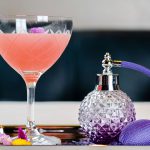 What to Sip at Fiola Miami, the New Outpost of the Michelin-Starred DC RestaurantBarstool Review, Features